The other day a whole bunch of us female glider pilots got together for a talky day organised by Liz, Claudia and Ayala. After some initial introductions of the pilots, there were about 20 of us, and the metaphorical wet fish (more on this later), most of us got to collect our new hoodies and T-Shirts, which we promptly had to show off outside the hangar on a rather cold day: 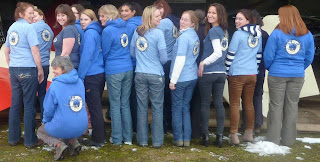 We then got together and all shared our thoughts on preparation, thermalling and using the energy while following a flight by Liz and Ayala on SeeYou and video feed. For the preparation, the importance of having a routine and some lists became clear. Having your head free to concentrate on the important stuff on the day itself makes such a big difference in your performance before the flight, i.e. making a plan for the days flight, and during the flight. Personally, I do love my lists, but I have to admit that I have not written any for XC or competition flying. I knew that developing a routine is critical for a decent flight but I felt that I hadn't enough experience to come up with some sensible lists for my first comp. I used a couple of XC flights earlier in the season to try out and learn what I actually needed and tested some of these things during my first competition in 2012, the Inter Services. I learnt a lot about the things I need at different stages during the day and flight and also what I need from my crew. I also have to say that I frantically ran around on the odd occasion or two, when I realised I had forgotten something, which once again stresses the importance of a good list. On the days when all went well I had much more time to actually think about my flying. So first on my list of things to do is to make a list!

We then had a look at Liz's and Ayala's flight on SeeYou and GoPro. I have to say I can't wait to get my own GoPro camera for my birthday this year (*hint, hint*) so I can relive and learn from my own experiences in a much more effective way. I often wondered during the Inter Services and other XC flights where other people would have gone given the same picture and why. And I also wondered if I would have taken different decisions myself - not so much to get the benefit of hindsight but to recognise how I make decision during flight and what I need to watch out for in the next one. To get back on topic, while watching the flight we chatted about thermalling techniques. There are some recurring themes that always turn up in this discussion, but all of these are important including the importance of controlled turns, turning in at the right time (i.e. a lot later then you think), as you don't want to turn in gusts and you need enough of an area of lift to get a full turn in, to turn tighter, to leave at the right time, to always adjust in order to stay in the core, to learn to interpret your glider so you know what your bum should look out for as well as understanding what your instruments actually mean when they start beeping at you. Getting the strongest lift is key to any good XC flight, and I am sure I can improve my skills. My to do in this respect is to have a look at my XC traces from the last season and identify one point I will work on over the next season.

We also chatted about getting the glide between the climbs right. Ayala showed us an inspirational trace of a 120km glide where the pilot did not take a single turn and made the most out of the energy around him. I know glides are very important too, but at this stage of my flying I feel I need to focus on my thermalling skills first rather than trying to be brilliant at everything at the same time.

Finally, something very important to take away for me personally is the idea of the wet fish. Many might laugh at this, but just like Liz, I believe that being in the right head space can make a real difference - be it in situations of pressure or after making a mistake or how you make the most of knowing you got it right. So the metaphorical wet fish was used by Liz if any of us girls try to undersell our skills or confidence in our abilities. I will put my hand up and recognise that I certainly suffer from underselling myself and my skills and I realise that a change in this attitude would increase my performance not just as a glider pilot but as a person in general. So this is certainly something to ponder about.

Unfortunately, we did not manage to talk through our aims and objectives for the next year, but here are mine:

So those are the things I will take away form the Talky Day this year and I hope I can tick most if not all of these boxes - well at least one of them I started tackling already by writing this :-) Also, a huge thank you goes out to Liz, Ayala and Claudia for organising the day and to Oxford Gliding Club for having us all.
Posted by ClaudiaK at 12:29 2 comments:

ClaudiaK
Hello, I am Claudia, a glider pilot in the UK who is keen to share her flying experiences and adventures - the good, the bad and the ugly. Here, I will keep everybody who is interested what is happening in my gliding world.